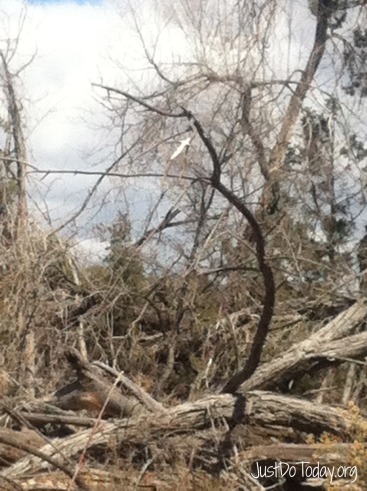 I’ve only shared this photo with a handful of people. It’s personal and precious. Holding it close to my heart, I didn’t want its strength to dilute. I didn’t know how others would react; it meant something to me. Opinions and comments might have confused my inner convictions. I snapped it during a season of my life when I was only surviving; not really living. Oh, I was doing daily activities but, by the hardest.  On the outside, I might have looked like I was fully engaged but, in truth I was not. For everything I did, required constant, ongoing, non-stop communication with the spiritual side of myself. Experiencing daily deep, deep grief; nothing that the world had to offer was strong enough to bind my broken heart. My most comforting companion was the Almighty. I can’t provide an explanation for what I saw, nor how it happened. But, I do know it served its purpose.

While hiking on my second trip to Sedona, searching for Sam’s happy face (you can read about that trip at A Sweet Small Voice signs had presented themselves, assuring I wasn’t alone. Oh, I had company but, I’m referring to another sort of companion, a hand reaching from Heaven. The first presented itself when we sat down for dinner. By chance, my chair was positioned alongside a wall of crosses. So many, that they caught my attention. I’m sure often, they were thought of as just decorations. If even, they were noticed by other diners. I tried to tell myself, “My seating situation wasn’t a big deal. It really wasn’t. Many others had sat there. ” That thought process worked for a minute but, really didn’t hold any weight. We signaled the end of our meal, asking for the check, when I listened to my spirit say,  “These aren’t merely wall hangings but, instead they are to serve as a reminder as to who is covering you.”  It was a wink of wisdom, and it worked. The well being of my spirit had been reinforced. I didn’t speak about my thoughts, I only tucked them into my heart. Hanging on the wall, near to where I sat, their symbolism served to connect me to the celestial.

Sedona is a small town with lots of wide open sky space. It doesn’t stretch for many flat straight miles but when there is open pathway between point A and point B, imagine how surprised I was to see a lonely purple balloon attached to a post in the middle of one of these outstretched spaces. Really?, I thought. Is this deserted balloon, in a desert town, tied on a single string  to a small post blowing around for just me to see? Many times, we remembered Samantha with these inflatable floaty items. Purple was the color she claimed as her “favorite”, the same as so many precious pre-teen girls. One time in particular, the community we call our home, attached messages to them and let them soar towards Samantha’s new home. The children in attendance, hopeful she would receive and read their final goodbyes. First the crosses, then the balloon; each of these had heightened my awareness of Heaven.

As the day begins to unravel and doubt tries to steal the divine, I began to reason away what happened. Laying in bed, I labeled these two occurrences as just triggers. Not in a negative way, as often times triggers are thought of. Instead, I explained them to myself as earthly things encountered that made me think of something spiritual. Talking myself out of the possibility that they were actually placed in my path.

Finally, about the picture I first posted above. For the second time, I had walked on Holy Ground. Not that there was any inherent holiness in the spot of ground where I was, more than in any other. Rather, it was a place for me where I had felt the presence of God. Snapping the picture that so many wanted to see “Sam” with a smiley face . Then, we spent the rest of our trip relaxing and relishing what had just happened. We hiked through different parts of Sedona’s majestic, in my southern mind, I’ll call them “mountains!” I was crossing a creek, looked up, ahead and to my left. Something in the trees caught my eye; it was glistening. Pausing, I saw in those barren scraggly branches, a shiny, shimmering cross. As if, it had been painted upon the branches, but not really. In my eyes, the image was 3D, it was real. It was weird and wonderful, it was awesome and truly, made me uncomfortable. Squinting my eyes, again I was silent as to what I saw. Surreal, almost to the point of unbelief, all I could do was stare, soak it in and based on past experiences, I knew to take a picture.  Allowing the image and it’s environment to confirm I had been “called” back to Sedona. The picture itself telling the story of the cross. In the barren, stripped, scraggly phases of grief, or loss or life, it is our Savior that shines forth and leads the way.  The second scouring of the mountain had indeed, been blessed.

Oh, I had prayed fervently, before booking my return flight, wanting to ensure I was returning for the right reason. I surrendered that hike to Him, begging Him to stop me if it wasn’t His will that I go. Not wanting to snap a picture of  “Sam” with a smiley face just for myself. Rather, I wanted to return the glory to God for his pouring of grace upon me. With the picture in possession, I could share with people the story and the signs; seeing is believing. This was the third time on my second trip that I sensed His Holy Presence with me. I mean, I know He is always with me but, He was placing before me sights that were assuring me.

Something told me not to try and reason away what had happened this last time.  Instead, I chose to look at it and see it for what it was. Interpreting it as a supernatural sign, just for me.

In the future, some scientist might try to explain to me about refractive light bouncing off of a rock formation creating these kind of imaginary images. I won’t listen.

Instead,  I will allow what I saw to strengthen my spirit,  just as we are told to do in the scripture:

“This salvation, which was first announced by the Lord, was confirmed to us by those that heard him. God also testifies to it by signs, wonders and various miracles and gifts of the Holy spirit distributed according to his will